Raffo Cup Success for Holy Child After 2 Decades of Pain

On Tuesday 9th April Holy Child ended their long wait for Raffo Cup success. After many years of final and semi-final heartache, the boys from Holy Child, eventually got to bring the prestigious trophy back home to their Andersonstown school.

The boys had a great start to the gaelic campaign, back in October, when they reached the League Final. On a day of atrocious weather, and gale force winds, the boys were second best to a strong St Brides team, however the heartache of the league loss spurred the boys on for the remainder of the season, and in particular a clear focus on the Raffo Cup.

The Raffo Cup campaign started with a difficult group stage against St John the Baptist and St Michael’s, two great teams. The boys did not take any of these teams for granted and needed to dig deep to defeat St John the Baptist by a solitary point. The St Michael’s game was slightly more comfortable with scores from the whole squad, special mention to Anthony Hanna, Thomas Donnelly, Sean Duggan and Brody Branniff, who all contributed valuable scores on this day.

For the semi-final we were drawn to play against an in-form Christ the Redeemer team. The first half was tit-for-tat, with our defence under relentless pressure. James McDonnell, our full forward ran tirelessly creating space for Aodhán Peirce, Matthew Murray, Paul Austin and Fionn Collins to score the points to take us into the final. The boys had to thank Kiernan McKenna who, not for the first time this year, made wonderful and crucial saves, especially in the second half, to keep us ahead in the game.

The final was a day the boys had been looking forward to since the league final heartache and as luck would have it our opponents were St Brides (again), a chance for redemption. The wind was strong but apart from that the conditions were perfect for gaelic football at Colaiste Feirste’s school pitches, a fantastic venue! The school brought close to 40 supporters from P7, and the noise and encouragement from the stands helped massively. St Bride’s played with the wind in the first half and started the game strongly. Holy Child played on the counterattack and got the first score of the game, against the run of play, a goal from Matthew Murray. St Brides then took control hitting 5 unanswered points. Once again we had our goalkeeper Kiernan McKenna to thank for keeping the score down making some great saves and interceptions. Cormac Trainer and Brendan McMorrow were outstanding in defence, restricting a classy St Brides forward line to long distant shooting. The boys came in at half time trailing by 3 points.

During the interval we spoke of confidence on the ball, bravery and how the wind could benefit us now in the second half. The boys came out full of confidence and took the game straight to St Brides from the off. Aaron Anderson (captain) and Paul Austin began to control the game, spreading the ball into our classy half forward line of Matthew Murray and Aodhán Peirce, who ran the St Brides defence ragged. The 3 points deficit very quickly turned to a 5 point lead, all within the first 6 minutes of the second half. A wonderful goal and a few points from Matthew Murray and a penalty conversion from Aaron Anderson gave us a comfortable lead. James McDonnell and Brody Branniff put themselves about well in the full forward line and contributed crucial scores. Odhrán McAuley, in midfield, did the dirty work of covering runs, breaking up play and unsettling the St Brides midfielders, leaving Aaron and Paul to control the game with their running and passing ability. An early substitution needed to be made, as Thomas Donnelly was injured, and Jack McGinn, a natural forward, filled in at halfback for the team. Jack put his team first a played wonderfully in defence. St Brides did have their chances in the second half but good fortune was also on our side with two goal line clearances from Aaron and Cormac. With a few minutes to go and a 9-point lead, Fionn Collins, Finn Thompson and Sean Duggan came on and all had great opportunities to extend our lead further. The boys ran out comfortable winners in the end with the whole squad contributing to the historic victory.

Sometimes fate can play a major part in sporting finals and as a school, Holy Child were given a great lift the week leading up to the final. Our Principal, Mr Short, received a letter from a man named Phil Stuart, an ex-captain of a Derry All-Ireland team who defeated Kerry in the semi-final, in 1958, and were narrowly beaten by Dublin in the final. As a young man, Phil went on to teach at Holy Child and helped manage the team in the first ever Raffo Cup competition back in the early 1960s, a cup which Holy Child actually won that year, the first ever winners of the tournament! In his letter Phil wished the boys the very best.

Another omen for the boys was that the final was due to take place the day before Pat Trainor’s anniversary. Pat was an ex-teacher at Holy Child and a man held in the highest regard by everyone here at the school and the wider community. Pat did so much for gaelic games here at Holy Child, especially hurling, so much so that every year the Pat Trainor award is given to a child, from the school, who excels at gaelic games. Every year Pat’s wife, sons and daughters come to the school to present the award at our leaver’s assembly. So it seemed fitting that, on the great man’s anniversary, the school ended their barren run in the competition.

Sometimes your name is just on the cup. Luck, fate, call it what you will. One thing is for sure Holy Child are the Raffo Cup Champions for 2019!

Congratulations to our choir who came second in their category at the Bangor International Choral Festival on Thursday 4th April 2019.

Videos of the choir performing their 2 pieces are available to view on the 'Videos' page of this website.  It can be found on our homepage.

Both the boys and girls of Holy Child have had a successful week in their respective
cup competitions.
The boys were dealt a difficult group against St John the Baptist and St Michael’s
Primary Schools. Our first game was against a very well organised St John the
Baptist team. After a hard fought 25 minutes the boys prevailed by a single point.
Our second game was surprisingly a lot more comfortable. The boys ran out easy
winners with every member of the squad contributing to the victory.
The boys progressed through to the semi-finals, on Tuesday 2nd April, against Christ the Redeemer.

The boys were once again successful and made it through to the final against St. Bride's on Tuesday 9th April 2029.

The girls had a much more difficult group than the boys. They faced a very talented
Bunscoil Sleibh Dhubh team and an impressive Gaelscoil na bFhall team, the team
who defeated us in the league and league final this year. The girls did not let this
affect them. They were exceptional! The girls defeated Gaelscoil na bFhall in their
first game, with special reference to the defence who blocked everything that came
their way. The girls went into the second game knowing a win would take them
through to the semi-final and continued where they left off. If the girls were
nervous, they didn’t show it. Once again they performed exceptionally well and won
the game by 2 points. The girl’s feat was made even more impressive by the fact
that the squad contained only 5 primary 7 children, with the remainder of the squad
being made up of Primary 5 and 6 girls.

The girls progressed through to a  semi-final tie against an extremely good St John the Baptist team on Wednesday 3rd April, where they fought a good fight but unfortunately this semi saw the end of their 2019 journey.

On Tuesday the 19th March the 7 top P7 Primary school teams in Belfast were asked to take part in a tournament at Ormeau Park.

Holy Child played against St Matthews and Cairnshill.  They played against Christ the Redeemer in the semi-final.  The two teams could not be separated and a decision was made to split the cup between the two schools. “The final was played in an excellent spirit and both teams were a credit to their schools.”  Mr McCloskey

Our Erasmus students who accompanied the team were very impressed by such talent.

Congratulations to the girls who took part in a 5 a side tournament on Thursday 6th March 2019.

The team got their cup campaign off to a fantastic start on Tuesday 5th February 2019 with a superb 6-0 victory over St. Therese of Lisieux.  All the played played amazingly and what a way to debut their skills for our new team members.  Good luck in your future matches. 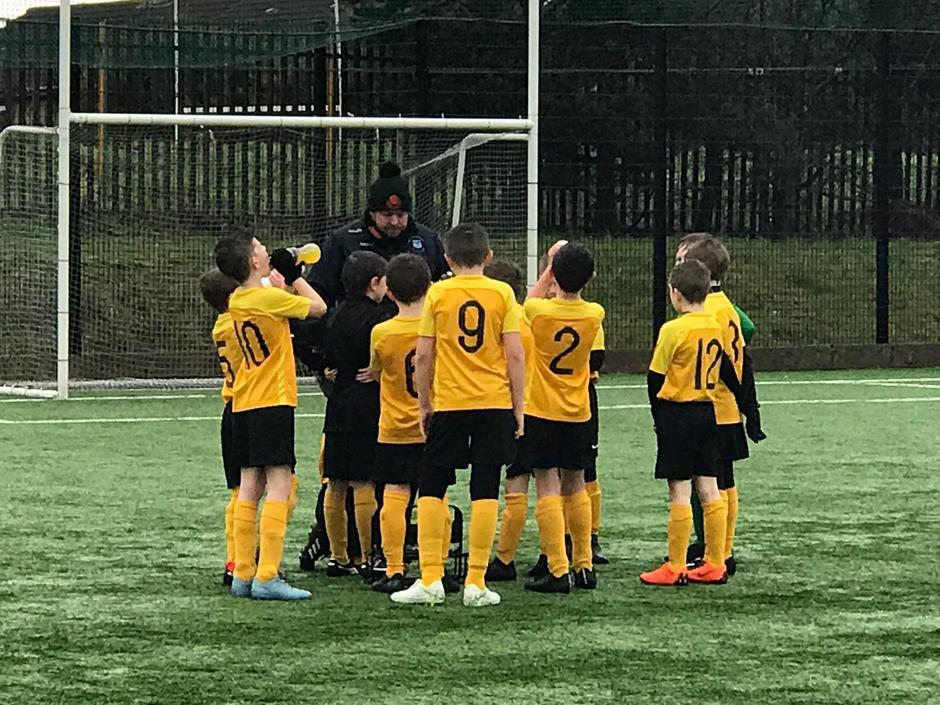 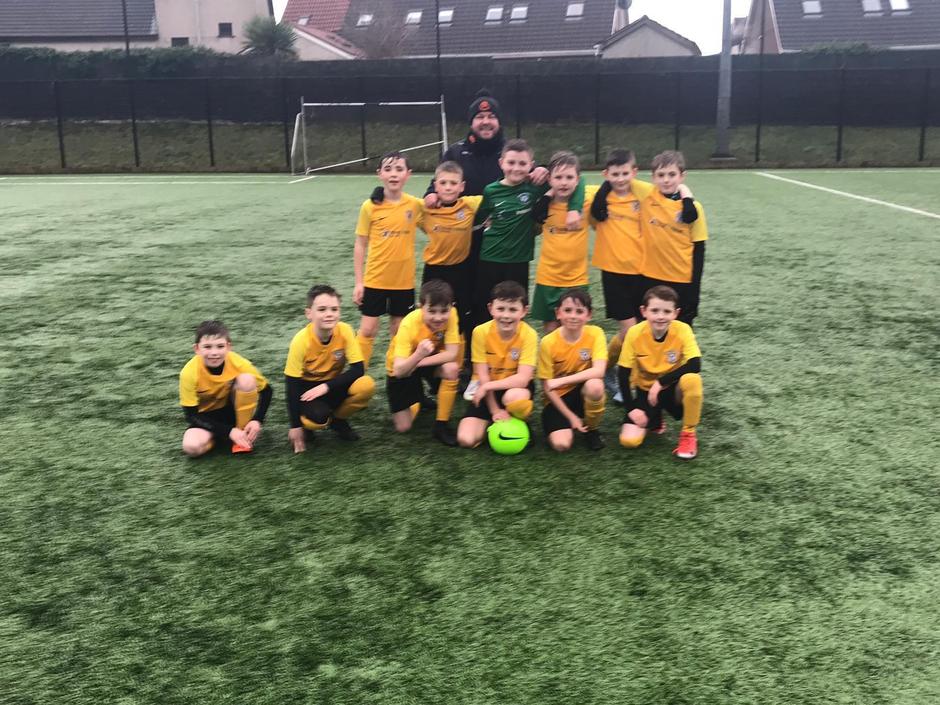 Congratulations to the boys who played a blitz against St. Teresa’s, St. Oliver Plunkett and Christ the Redeemer on Thursday 31st January 2019.   Following their successful day, they have progressed through to the Finals in April.

Congratulations to the girls who played extremely well in their matches on Thursday 24th January and made it through to the Belfast finals on Friday 25th January.  They played their hearts out but unfortunately were beaten in their final match.  We are very proud of their great effort and sportsmanship.

Congratulations to Mr McKiernan and his hurling team who are this years Belfast Indoor Hurling Champions.  The boys played extremely well and had 2 very tough days of matches.  The boys played in 3 matches on Thursday 17th January to progress to the overall final on Friday 18th January when they played another 3 matches.  They were rewarded for their hard work by being being crowned the winners of the Belfast Tournament.  They have now qualified for the Antrim County final in February.  We wish them lots of luck in their future games.