Hi everyone! We are P4B at Holy Child Primary School.

Welcome to our class page.  We have had  a very busy start to the year and are greatly enjoying our theme, Time to Move.  We will be visiting Castle Espie on November 9th where we will be learning about migration.  Did you know that Brent geese fly from Canada to Strangford Lough every Autumn?  Keep an eye out for photos of our trip!  We have been learning, too, about how our bodies move and how to stay clean and healthy.  We recommend reading Dirty Bertie.  He is a funny, scruffy little boy who likes nothing better than playing with worms or digging in trash.  We gave him a makeover and even made our own shampoo!  This week we will be making  our own toothpaste, so watch this space to see how that turns out!

Make your own shampoo.

We examined foods from home to see which ones contained the most sugar. We discovered that the best drink of all was water and the worst foods were chocolate spreads and honey.

Which foods contain the most sugar?

Next we decided to investigate further.  We wanted to prove that certain foods and drinks caused damage to our teeth so we took some eggshells which contain the same kind of material as teeth and we soaked them in things like water, honey, fizzy drinks and vinegar. One group even tried tinned spaghetti! Check out the pictures below.  Tomorrow we will take a closer look to see what happened!

We found out that vinegar, coke and chocolate spread caused the most decay to our eggshells.   They changed colour, became softer and even started to dissolve. It just shows you that you must look after your teeth.  After all you don' t want to end up with false ones, do you?

Check out our home-made toothpaste!

Father McGlynn joined in the fun too!

Check out our Halloween fun day!

Pupils of the month celebrating success in October with awards from Mr. Short

Our visit to Castle Espie

We celebrated our Advent assembly this week with prayers and singing. We all had our own special job to do and Mrs Deery said that we were terrific.

We have been learning about Forces in science so we brought in some toys to see how they moved. We grouped them as electronic, mechanical, wind-up, jointed and push or pull. Have a look at these toys and decide which group they belong to.

Pupils celebrating success in the month of November with certificates from Mr. Short.

Fr. McGlynn heard that we were finding out about life in the recent past and he brought in some of his childhood toys for us to see.

He has had his Action Man and Roald Dahl box set for forty years and they are in terrific condition.  I wonder how many of us will be able to say the same of our toys in the future. 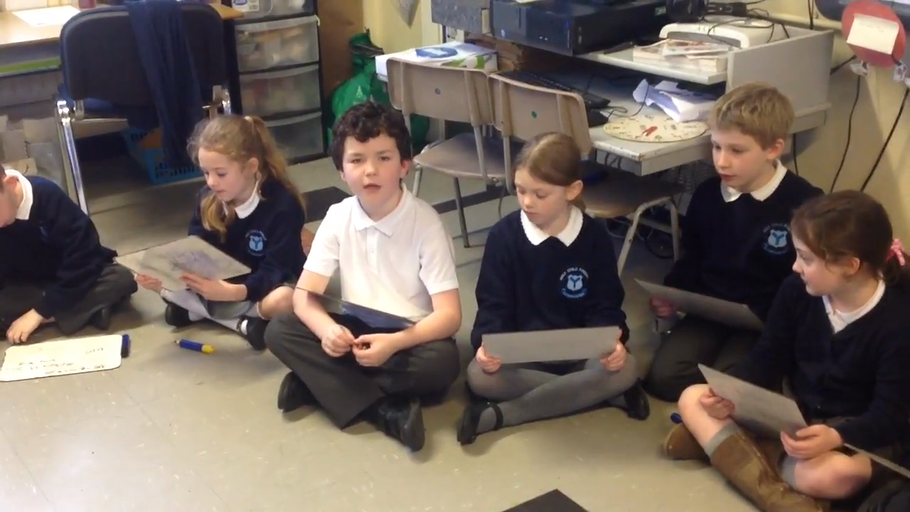 Listen to the thoughts of Mary, Joseph and the donkey as they make the long, difficult journey to Bethlehem 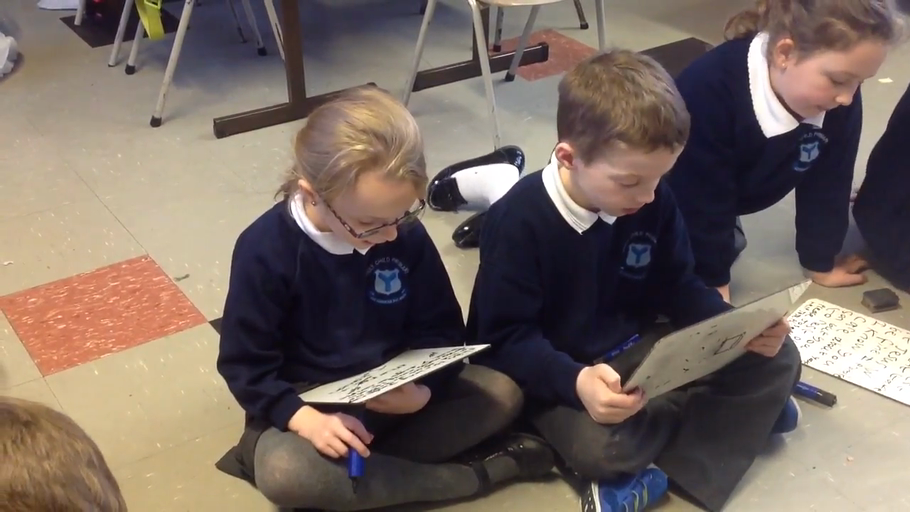 What a busy start to Term Two!  We are so busy finding out about The Animal Kingdom right now.  Our research skills and powers of observation are being put to the test.  Take a look at the activity below.  We had to sort our animal toys according to things that they had in common e.g. what they looked like, where they were from, what they liked to eat, that sort of thing. (This is called classifying.)  Then our classmates had to guess the category we had put them in.  Check out our pictures below.

What do you think?  Would you have grouped the animals the same way?  Maybe you could think of some categories of your own!

Next week a lady from Belfast Zoo will be coming in to show us some creatures up close.  So keep an eye on our class page for news of that.

Roll up! roll up! What kinds of animals did we get to see today? Scan through these pics to find out!

Pinto is an African Pygmy hedgehog.  She lives in a desert habitat.  She is nocturnal.  Her diet is mainly worms and insects.  At the zoo they give her cat food too.  She, like all hedgehogs, is lactose intolerant and should never be given milk.  Foxes and badgers prey on her.

Freddy, the White tree frog, was named after Dr. White who discovered the species.  It is actually brown in colour and its skin is moist.  It has suction pads on its legs and toes so that it can grip well.  It lives on huge leaves in the canopy of a rainforest and never needs to go near water because when it rains the leaves hold the water like a puddle.  This frog can change colour to green to camouflage and protect itself.

Samantha the snake is a Royal African python.  She is 20 years old. She has no ears so she can't hear and her eyesight is very poor.  She uses her tongue to find food.  At the zoo she is fed one white mouse every Friday.  Her skin is dry, scaly and patterned so that she can camouflage herself. When she lays her eggs she buries them underground to protect them from predators.  Once every 6 months she sheds her skin.

Rosie the tarantula is an invertebrate which means that she has no backbone.  She is not an insect because insects have 6 legs.  She is an arachnid.   She has 8 legs.  She has tiny hairs all over her body to warn off predators.  We were surprised to know that her main predators are wasps and people.  In Venezuela spiders are eaten covered in chocolate or caramel! Although Rosie produces  silk she does not weave a web.  She is not poisonous.

Sticky the stick insect is another invertebrate.  He can change from green to brown so that he can hide on leaves and branches.  Spiders and birds prey on him. He has red markings on his front legs and so when he is in danger he tucks them in under his body.  He sort of dances as he moves, like a leaf in the breeze.

Speedy is a Giant African Land Snail.     He eats constantly!  Cucumber, apple, carrot, lettuce and tomatoes are some of his favourite foods.  His eyes are on tentacles.   He is called Speedy, not because of the way he moves, but because if you touch him between the eyes he curls up his tentacles.

X- RAY Vision: We looked at some vertebrates and had a go at recreating their bone structure from x-ray images. Didn't we do well?

Pupils of the month celebrating success in the month of January with awards from Mr. Short

We have completed our topic, Animal Magic, and are making an appeal to you to be aware of animals that are endangered. We care about the animal kingdom and we don't want to see any more animals become extinct. We made posters to show you what we mean.

Congratulations to these children for receiving pupil of the month awards from Mr. Short for the month of February.

We have begun our new topic which is called Myths and Transformations. It takes us back to Ancient Greece and a time when gods and goddesses ruled the Earth using their powers to punish and reward humans.  Our first story, Theseus and the Minotaur, tells the tale of a brave prince who killed a beast at the heart of a labyrinth and set his people free from its terror. But unfortunately he did not treat a young princess very fairly and he ended up paying a heavy price. Today we decided to recreate the labyrinth at the centre of the story so we went outside into the sunshine. and had some construction fun. Take a look below. 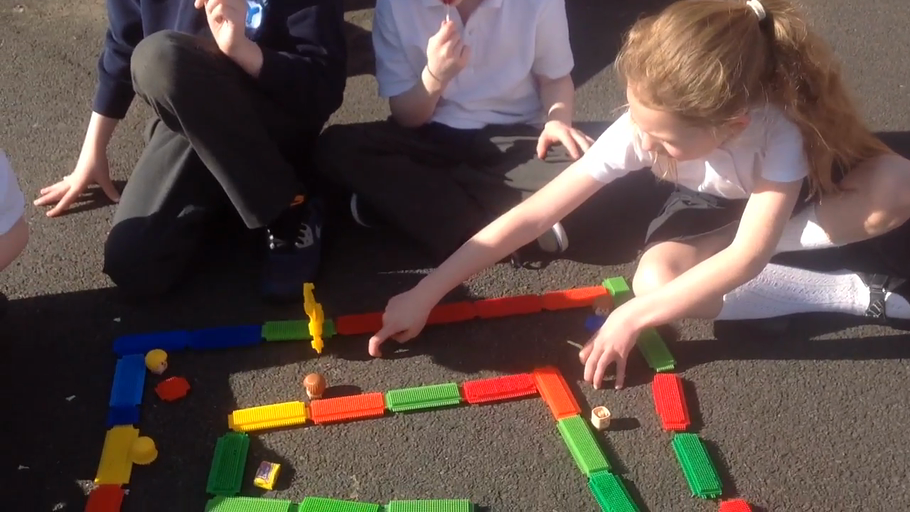 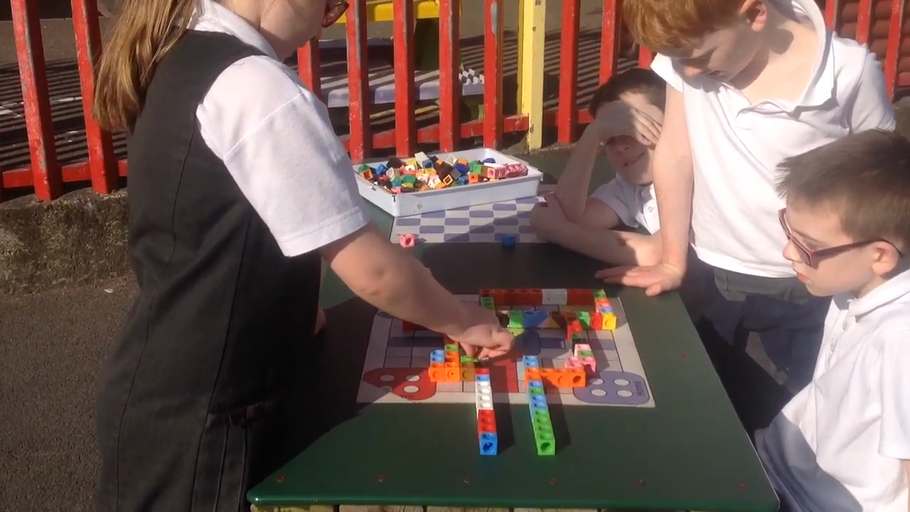 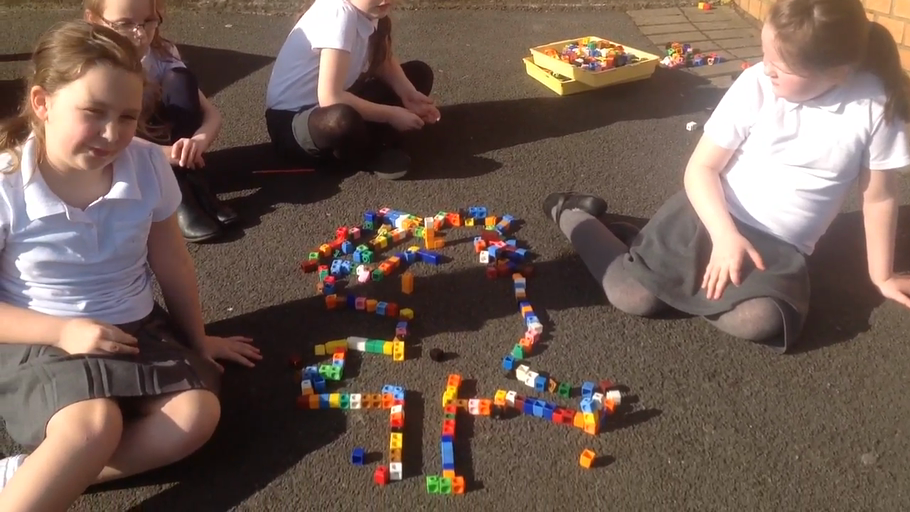 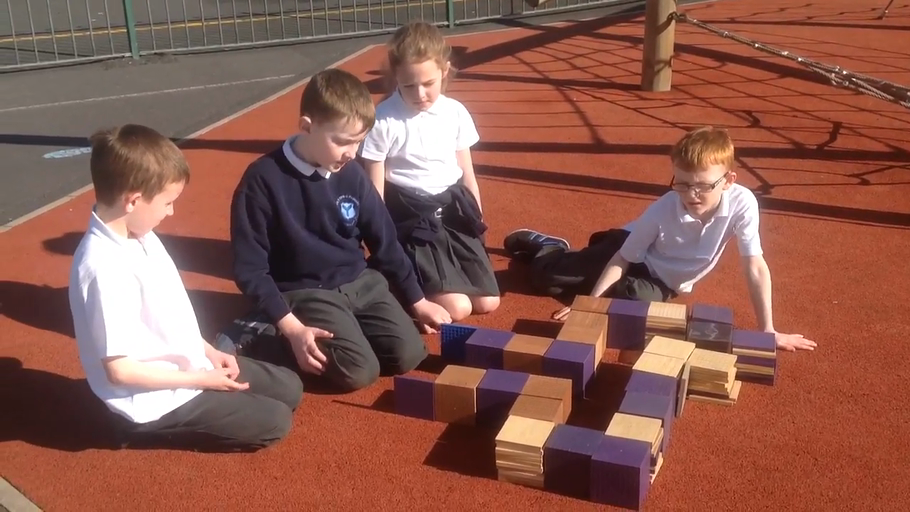 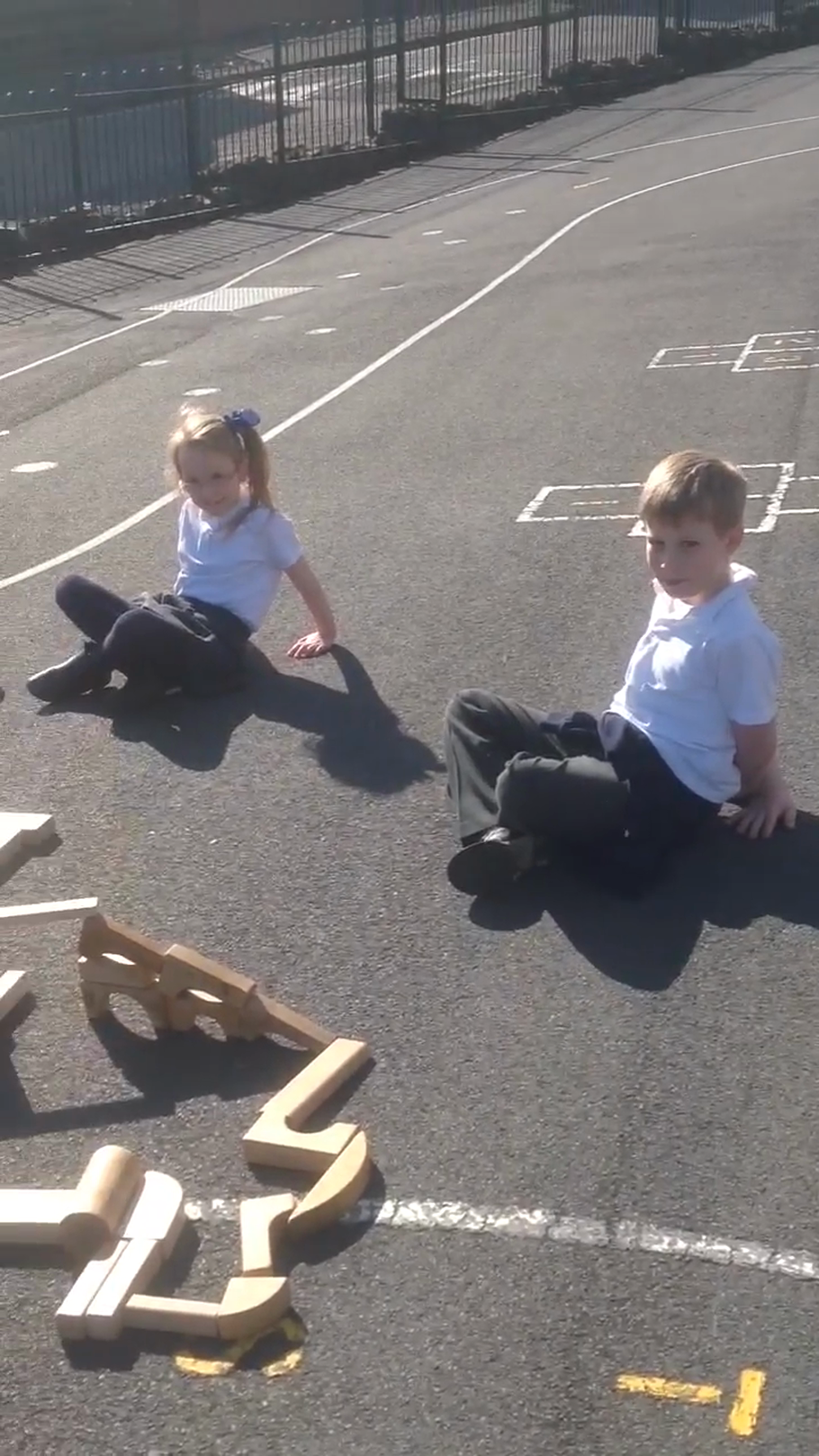 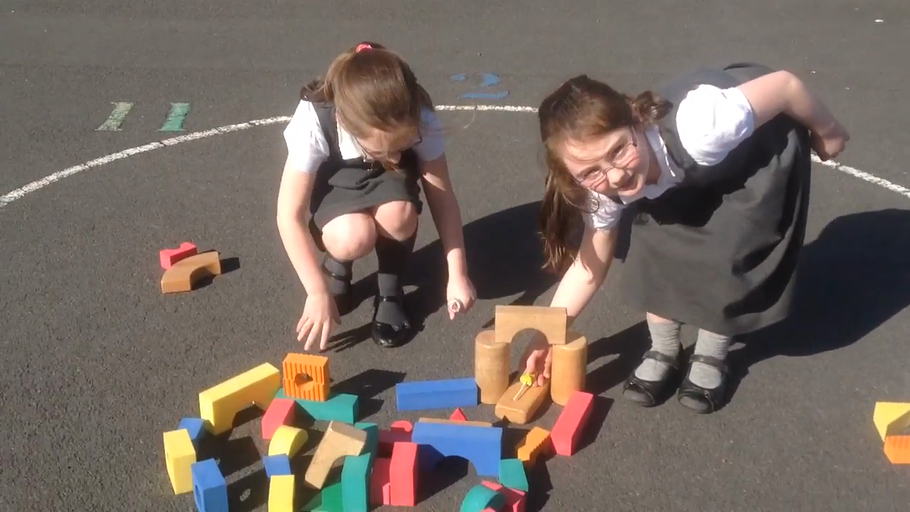 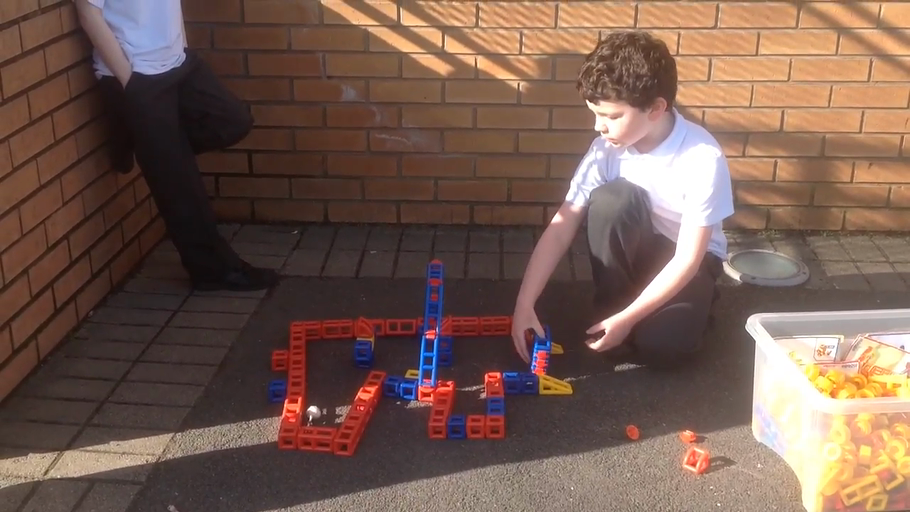 We celebrated St. Patrick's Day today through song and dance. Molly Malone and The Waves of Tory were a big hit and we had lots of fun performing them. 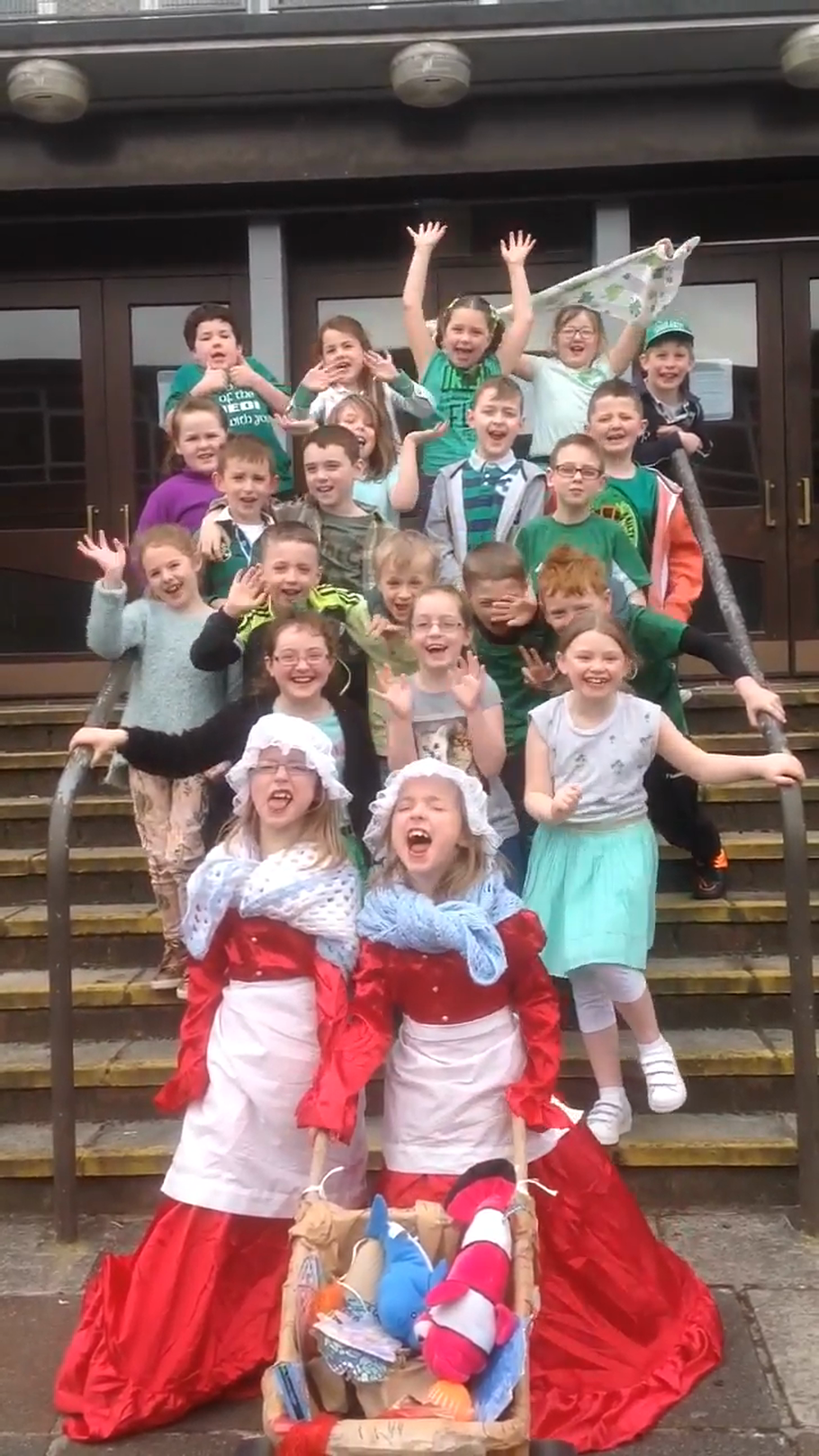 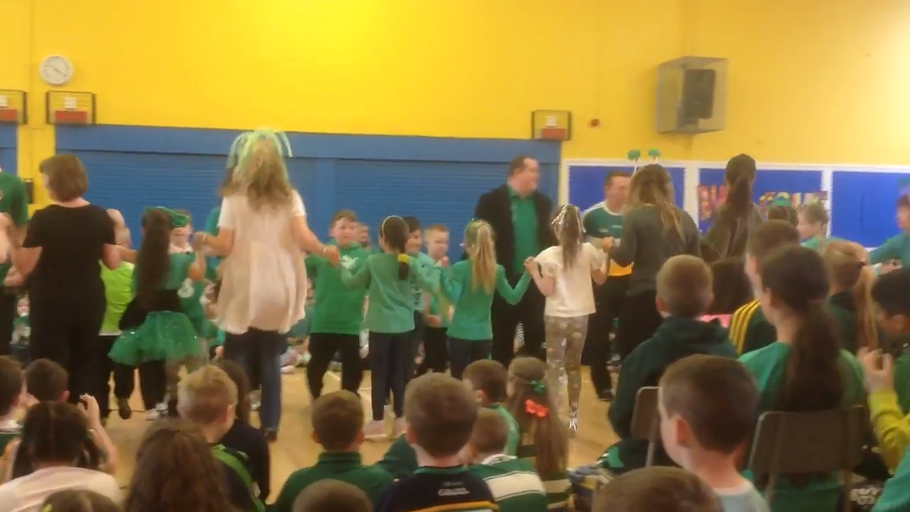 Thinking Skills
Today, some of us turned into teachers. Mrs. Thompson showed a group of 7 children in our class how to examine 3D shapes in order to find the number of faces, edges and vertices that they had.  Then those 7 pupils had to work with 2 other children and teach them how to do the same thing.  We were using the thinking skill of helping others to learn.  Take a look.

Pupils of the Month awards from Mr. Short for the month of April

Today we travelled back in time to 1945.  We were World War II evacuees, sent from Belfast to Springhill, a safe place in the countryside.   What an adventure we had!  We met land girls, made identity cards,  hid from air raids, learned about rationing, how to make do and mend and we even got to hunt for a double agent! Is it any wonder that Mrs. Thompson dozed off on the bus on the way home!  Our thanks to Springhill for such a fabulous, fun day.  Check out our pictures below. 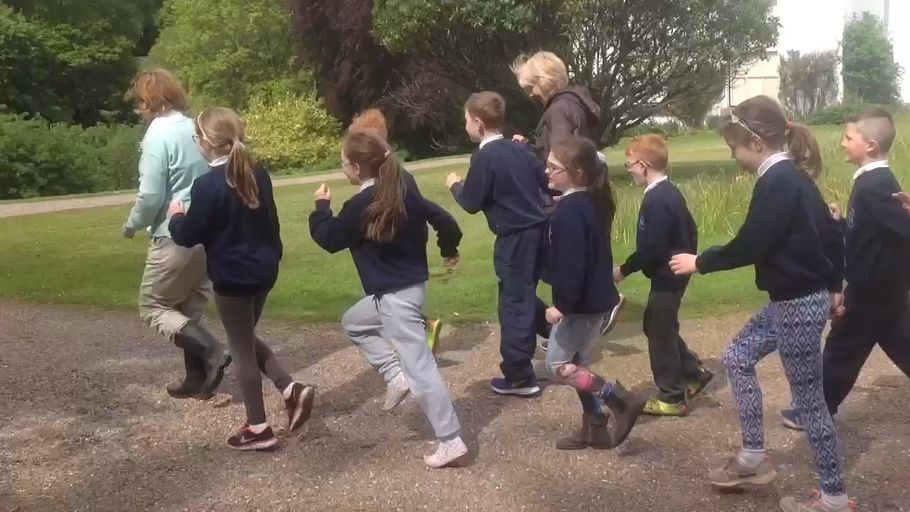 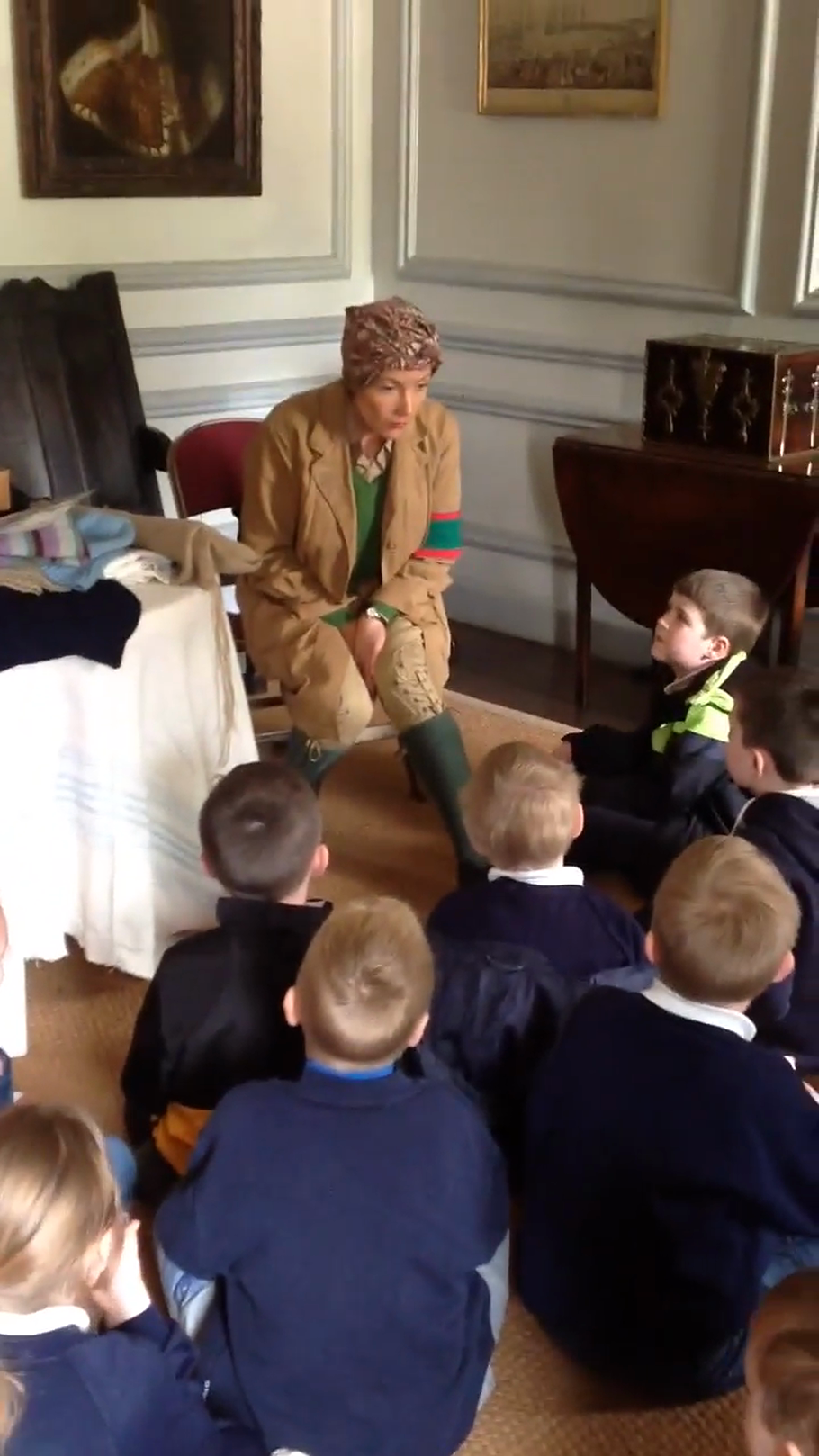 Blitzkrieg means Lightning War. It was called Blitz for short. The Belfast Blitz took place on the 7th and 15th April and 4th May 1941.

During World War II thousands of gas masks were given out to keep people safe.  You had to take them everywhere and at school your teacher would have taught you how to put them on and take them off.  To encourage young children to wear them there was a Mickey Mouse gas mask. It was red in colour. Babies had a special protective helmet that covered their entire body and adult masks were black and made of rubber. Thankfully they were never needed.

With the help of Mrs. Naughton we had a go at making our own. I wonder if you can tell who we are.

Pupils of the month celebrating success in June